A topic not often spoken about is Special Needs for the Disabled.

Easy, clear access in and out of the bathroom is vital, especially for those in wheelchairs, walkers or on crutches. Consider the entrance and passageways through the bathroom. If you’re designing from scratch this shouldn’t be too difficult to get right, but if you’re renovating you may need to shuffle existing fittings around, depending on what you will need to allow for. The wider the spaces you can manage, the better this will be for maneuverability.

The bathroom should be as step-free as possible, and if your bathroom involves a step or a cramped shower stall, this may be a good time to reassess the shower. Frameless, and/or stepless showers and wet rooms can be very useful. If you’re renovating, making this kind of change will likely involve a rethink of your whole bathroom to compensate for the extra waterproofing required.

If you’re adapting an existing shower, giving the floor an anti-slip coating can help prevent accidents. You may also want to install a shower seat which can be folded up when not in use.

Another thing to consider is a single handle mixer tap, which can be operated far more easily than conventional twist taps. These kinds of taps are fantastic for people with sore fingers, thumbs or wrists.

A higher toilet may be needed too, as they are often easier for a people with mobility impairments to use. This can be accomplished either by raising the toilet, or by adding a raised toilet seat. It’s also a good idea to install some handy grab bars – there should be one installed on at least one side of the toilet.

The sink height will generally need to be lowered, depending on height requirements. If you’re accommodating for a person in a wheelchair, don’t forget to allow access under the sink to make space for a wheelchair rolling up. Make sure the taps are within easy reach too, and that the mirror is low enough to look into.

Standard bathtubs usually present the biggest problems. Because of the bathtub walls, it’s not always easy to get in and out of the tub safely. One alternative is to consider a walk-in tub. These are specially designed with a door that allows access to a seat inside the bath. When the door is closed, the bath becomes a watertight capsule and can allow bathing from a seated position. One important factor to think about is which way the door opens. A bath with an outward opening door will need clear space to swing open, but the door on an inward opening tub won’t open while the tub is filled with water. This may hamper emergency measures if something goes wrong.

If you’re not using a walk-in tub, you may have to carefully place grab bars on the walls near the bath. These should be mounted by a professional, attached to a wall stud, and tested thoroughly. If a grab rail fails, it may even cause an accident rather than prevent one.

Is your home bursting at the seams? We can help.

Get in touch Today 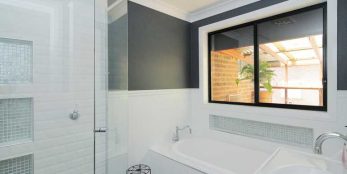 We highly recommend Jamie Shaw of Jamie Shaw Building, who has recently completed high quality work at our home. Throughout the past two or so months, from the quote, till the completion of works, Jamie and his team have provided…
Michele & Mike Browne
Jamie is a perfectionist, and it shows in his work, from every aspect of the house externally to the intricate details internally which makes the houses he builds, nothing less than perfect. We love the passion Jamie and the team…
Hannah Jobson

I can not thank Jamie and his Team enough for the dedication and commitment they shown throughout the process of building my dream home. The whole build exceeded our expectations from the level of workmanship, time frame and service.
Rebecca Ahern